Commissioned by CEO Scot Filer in 2015 the Lions Gate ‘House Post’ Totem symbolizes the company family, our togetherness and protective nature, our strength as teachers and providers and the leadership that steers us in the right direction.

It also symbolizes the importance we attach to our relationships with First Nations communities and our work with those communities to create safer environments to live, work, play and learn. 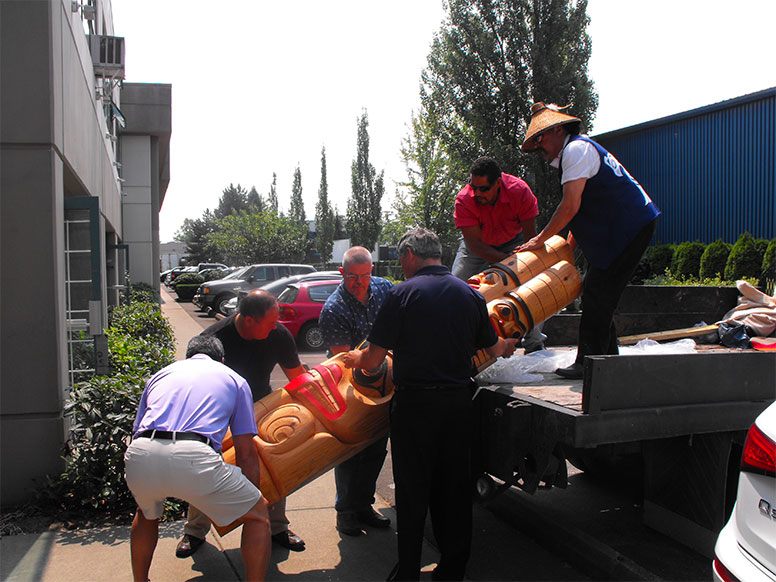 Image 1 – July 2015 the house post arrives at the Lions Gate Office. Freshly carved and painted the red cedar still has a heaviness that will dissipate as the wood dries out. The artist Frank Horne Sr., his son Frank Horne Jr, Scot Filer, Ivan Chu, Steve Brown and Mike Franklin all lend a hand. 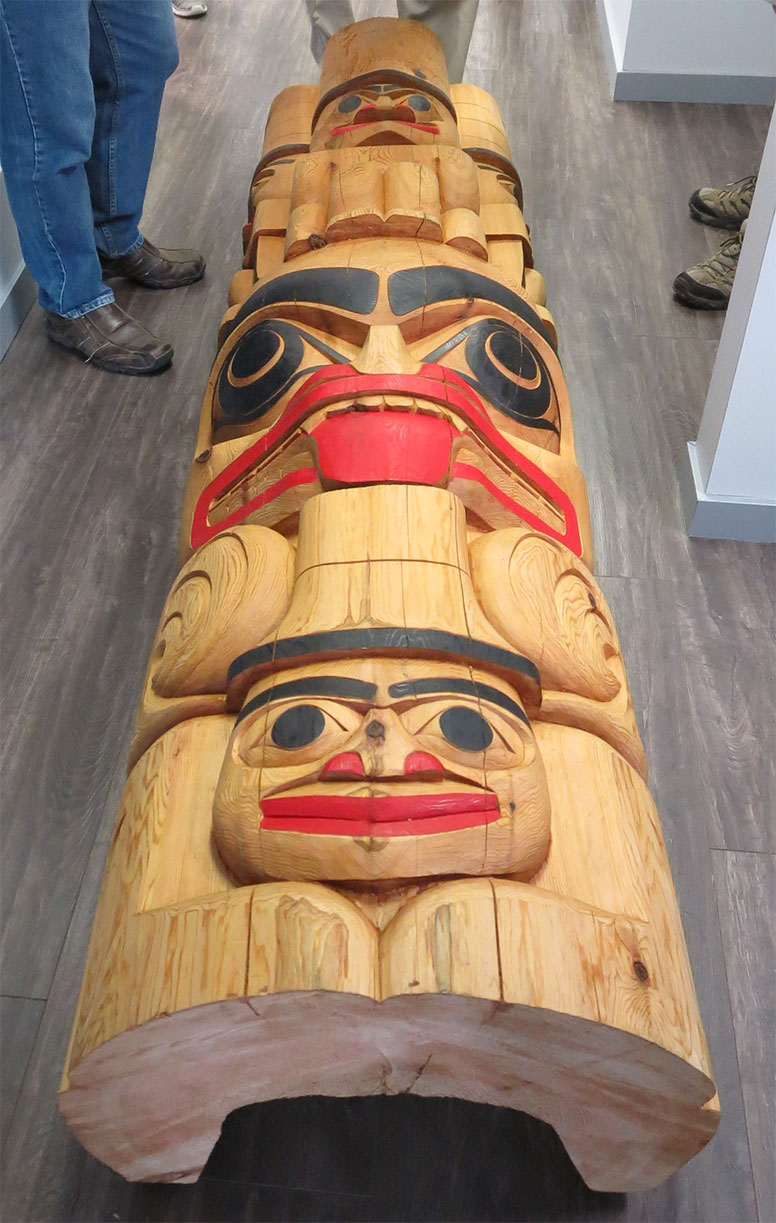 Image 2 – The House Post lies ready to be raised. The cracks in the post will close as the wood dries.

“I am a self-taught artist, developing and refining my techniques and creativity through study and admiration of the powerful and beautiful Salish art form. I carve with cedar and alder wood, producing three dimensional poles and masks. Every graphic and carving is an original and unique creation reflecting me Salish heritage and tradition. With the re-emergence of little-known Salish Art, we are laying the foundation, honoring and recognizing past, present and future Salish artists. Scholars, private collectors, galleries and the general public are witness to the development of tradition in the making.” -Francis Horne Sr.

Francis Horne was raised in Duncan, British Columbia, Canada and began carving in 1973. He is largely self-taught but was greatly influenced by Simon Charlie, a prominent Chief and accomplished Salish artist, Francis has produced numerous major totem poles and smaller wood sculptures for public, corporate and private international commissions. The city of Duncan, known as the “City of Totem Poles,” has five of his poles. His work is known for its elaborate detail and precise incisions. Francis teaches carving at a local college and is an active practitioner of First Nations spirituality. 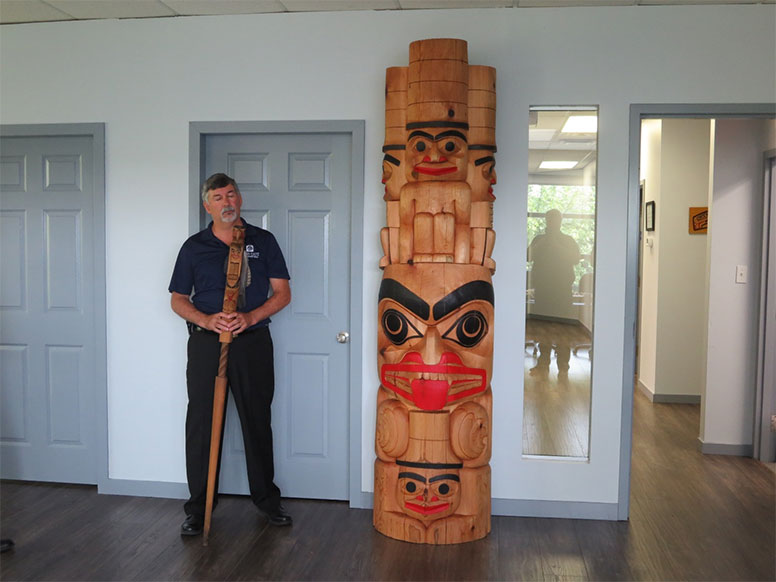 Image 3 – Scot Filer Lions Gate CEO has the talking stick and adds his comments after ceremony and drumming.

What is a Totem?

Totem poles are monuments created by First Nations of the Pacific Northwest to represent and commemorate ancestry, histories, people, or events.  Totem poles are typically created out of red cedar, a malleable wood relatively abundant in the Pacific Northwest, and would be erected to be visible within a community. Carving a Totem Pole requires not only artistic skill, but an intimate understanding of cultural histories and forest ecology. Most totem poles are made from Western red cedar, a rot-resistant tree that is straight-grained and easy to carve. Before a cedar tree is harvested for a totem pole, many coastal First Nations communities will perform a ceremony of gratitude and respect in honor of the tree. Several trees may be inspected before a particular tree is chosen for its beauty and character. According to Roy Henry Vickers, an artist of Tsimshian and Haida ancestry, “each tree is like a human being; it has its own personality and uniqueness.”

The Coast Salish of the Lower Fraser tended to carve house posts rather than single stand-alone poles These house posts would frequently appear on the interiors of longhouses.

The symbolism of the totem is not lost on us here at Lions Gate and it speaks to the indigenous spirituality as well as the artform.

The three watchmen crouching at the top of the house post each wear high crowned hats that usually have two or more rings carved into them representing the status of the Chief whose house they guard. The watchmen are known to have supernatural powers, and from their position they keep watch over the village and out to sea. They protect those within the dwelling by warning the Chief of any approaching danger.  In our new premises in Delta the house post and its watchmen overlook the front of the building where we receive visitors. 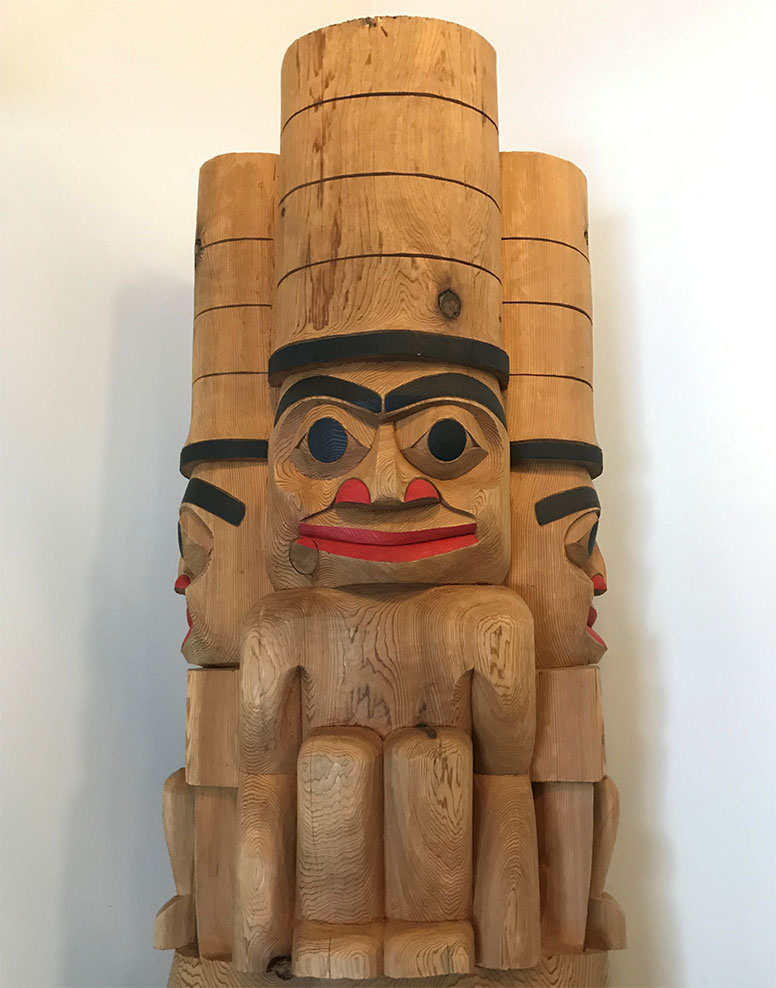 Below the watchmen is the black bear.  Black bears are depicted with a short snout, short ears, small tail, and sometimes hanging tongue. The bear symbolizes family and strength and family, because bears winter with their young until they are yearlings, and strength because a mother bear will always fight to protect it young and can be very fierce in this situation but then can be gentle and quiet as well.  Because of human traits the bear shares, it is believed that the bear understands human speech and thought. The bear has a great self-awareness and is also able to deliberate about choices or actions. 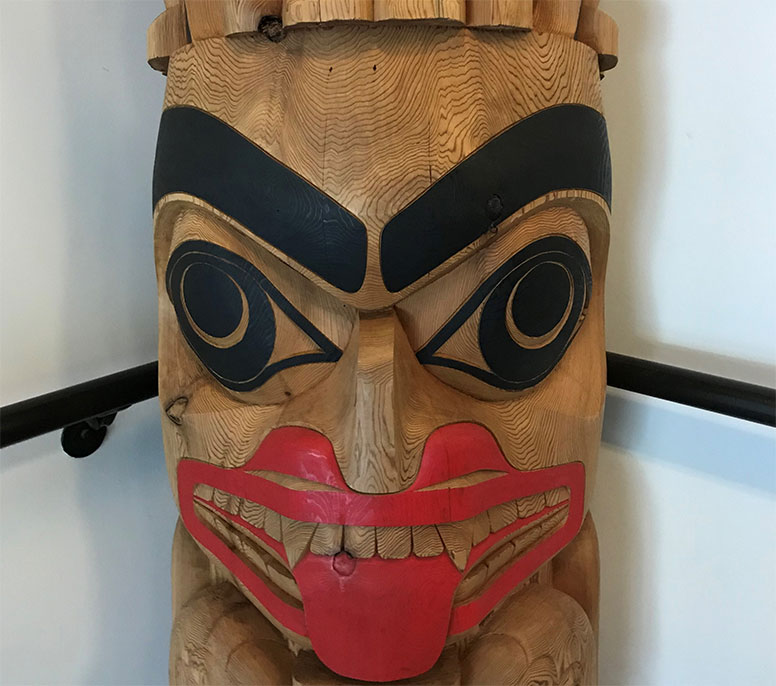 At the foot of the pole is the chief.  The vertical order of images is widely believed to be a significant representation of importance, an idea that became so pervasive it entered into common parlance with the phrase “lowest man on the totem pole”. This phrase, indicative of the most common belief of ordering importance, suggests the higher figures on the pole are more important or prestigious. A counterargument frequently heard is that the figures are arranged in reverse hierarchy, with the most important representations on the bottom, at eye level with the viewer to heighten his significance.  Clearly in this instance our chief seeks to heighten his significance. Given the complexity and symbolic meanings of carvings totem poles, their placement and subsequent importance lies in the observer’s knowledge and connection to the meanings of the pole’s figures. 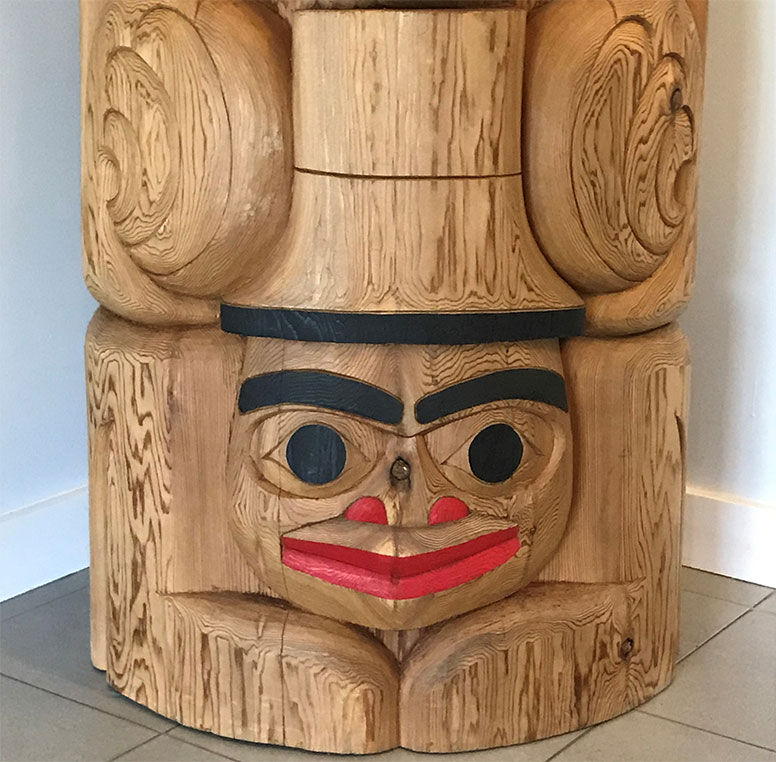